Charles R. Drew's (1904–1950; College of Physicians and Surgeons 1940) work as a physician and researcher led to his development of the world’s first blood bank. He also improved techniques for blood storage and created large-scale blood banks early in World War II. He protested against racial segregation in the donation of blood from donors of different races since it lacked scientific foundation.

In the summer of 1940, as the Luftwaffe’s bombs rained upon England, Drew was in New York City at Presbyterian Hospital, where he was a surgery resident supervising one of the most ambitious blood drives in history.

The “Blood for Britain” project, as it was known, collected donations from thousands of civilians, whose blood plasma was sent across the Atlantic to aid the Allied effort. Dr. Drew was chosen to lead the drive based on his research into a problem that had long bedeviled doctors: How do you keep blood from spoiling?

As soon as the circulatory system was discovered, doctors began trying to perform transfusions. The difficulties were myriad. Blood coagulates rapidly. Doctors had no idea why transfusions worked sometimes but not other times. Blood types were not discovered until 1901, and the Rh group was not identified until 1937. Even with the increasing knowledge about blood, scientists still had no way to keep blood from going bad. In 1930, when Drew began his research, blood had a maximum shelf life of a few days. For a blood transfusion to be successful, then, the donor had to be on hand, making blood donations in a war zone, with bombs and bullets flying, challenging.

Drew’s thesis, for which he was awarded a Doctor of Medical Science degree from Columbia in 1940, focused on plasma, the liquid part of blood separated from the cells. He discovered that cells are what determine one’s blood type; therefore, plasma, being devoid of cells, could be given to anyone in need, regardless of blood type. He also devised a method by which plasma could be dried and then reconstituted with distilled water later on when needed. The two innovations would transform emergency medicine.

Blood plasma, though lacking cells that carry oxygen, has critical proteins and antibodies that help stabilize blood pressure and regulate clotting, making it ideal in a battlefield situation. Drew’s work made it possible to quickly collect and test thousands of units of plasma, which were sent to Britain in the winter of 1940–41 and saved many lives.

In 1941, Drew became the first director of the American Red Cross Blood Bank, the first national blood bank in the country. Drew had a successful career as a professor, medical researcher, and chief surgeon at Howard University, a renowned and predominantly black university. In 1943, he was the first African American selected to serve as an examiner on the American Board of Surgery. His life was cut short by an automobile accident in North Carolina while he was making his annual trek to Tuskegee, Ala., to attend an annual free clinic. He was 45. 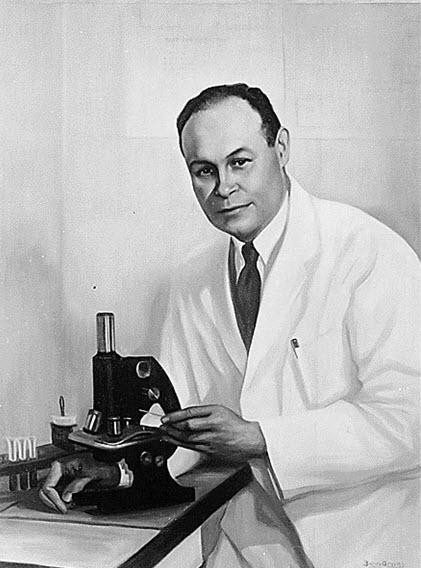 Read more about Charles R. Drew at the National Institutes of Health.