Paul Robeson (1898–1976; Columbia Law School 1923) earned a degree from Columbia University's Law School, teaching Latin and playing pro football on the weekends to pay tuition. Robeson won critical and popular acclaim for his stage and screen roles. It was as a concert singer, however, that he earned his greatest fame, performing a uniquely broad repertoire of spirituals, classical music, world folk songs and political songs that reflected the struggles of the marginalized and disenfranchised.

In 1921, he wed fellow Columbia student, journalist Eslanda Goode. The two would be married for more than 40 years and have a son together in 1927, Paul Robeson Jr. Robeson briefly worked as a lawyer, but with the encouragement of Eslanda, who would become his manager, he left to turn fully to the stage.

In 1924, Robeson played the lead in the production All God's Chillun Got Wings, and the following year, he starred in the London staging of The Emperor Jones—both by playwright Eugene O'Neill. Robeson also entered film when he starred in African American director Oscar Micheaux's 1925 work, Body and Soul. Robeson continued to make waves in London in 1928 with his star turn on stage in Showboat, where he brought the house down with Ol' Man River, a song destined to become his signature tune.

In the late 1920s, Robeson and his family relocated to Europe, where they lived for more than a decade. He established both a singing and film career, and his next big-screen feature was 1930's Borderline. He was also in the 1933 movie remake of The Emperor Jones and would be featured in six British films over the next few years, including the desert drama Jericho and musical Big Fella, both released in 1937.

During this period, Robeson also starred in the second big-screen adaptation of Show Boat (1936), with Hattie McDaniel and Irene Dunne. His last movie would be the star-studded Hollywood production Tales of Manhattan (1942), which featured legends like Henry Fonda, Ethel Waters, and Rita Hayworth, among others. Robeson critiqued the film for its demeaning portrayal of African Americans.

Robeson and his family returned to the United States in 1963. After Eslanda's death in 1965, the artist lived with his sister. Robeson died from a stroke on January 23, 1976, at the age of 77, in Philadelphia, Pennsylvania. 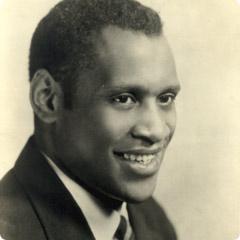